£12m for survivors of domestic abuse

The Big Lottery Fund in Scotland today announced funding worth £12 million to 24 projects across Scotland to provide support to survivors of domestic abuse. 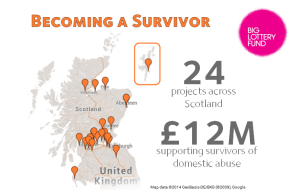 The funding from the Becoming a Survivor programme means there will be greater access to support services for women, men, and families who have lived through domestic abuse.

Speaking today at a conference for people working with and supporting those affected by domestic abuse, Big Lottery Fund, Scotland Director, Jackie Killeen, said: “This multi million pound investment will help to build support around the needs of some of Scotland’s most vulnerable and hidden people. These projects will work with those concerned, supporting them at as early a stage as possible. They will also reach into some of Scotland’s most remote and rural communities helping families and children relocate to places where they can feel safe. The latest Police Scotland figures indicate the number of reported domestic abuse incidents in Scotland have risen over the last year, so we know that this is an area where our funding is desperately needed.”

Here are a list of the 24 successful Becoming a Survivor projects.